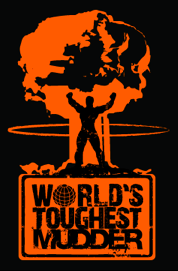 Tough Mudder put on their 4th annual World’s Toughest Mudder event in Las Vegas California this past weekend (November 15-16, 2014.) This event was a race and a challenge unlike their other events which are deemed as only challenges. The difference being that the event is timed, there is a winner and a prize purse. Sean Cummings was in attendance and gave a motivational opening speech, as always before sending the 1200+ competitors off on their first lap (a sprint lap) at 10 o’clock a.m. Once the gun went off there was no stopping for 24 hours if you wanted to be considered a finisher. Do you have what it would take? 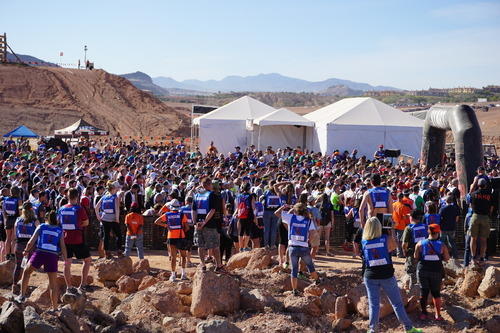 The last three years, Tough Mudder was hosted at Raceway Park in New Jersey and the course, although scattered with some new obstacles each year, was getting old for veteran racers. With a change of venue Mudders were wondering if this is going to be another World’s Toughest Mudder ho-hum event. Tough Mudder responded in a strong way this year and made not only the course tough but the obstacles challenging and unique – something every participant it’s likely to forget. The 5 mile long course was rough, rocky and rutted, and included 800 feet of elevation gain, a complete opposite of previous year’s flat course. The majority of obstacles present were made specifically for this event or modified from their original form to challenge the competitors – another new attribute.

Most notable by all Mudders was the modification to walk the plank, named The Cliff, which consisted of a free fall of 38 feet into the lake water below, followed by a short swim and a cargo net climb to the opposite shore. There is nothing on a grander scale that has ever been seen at a TM or World’s Toughest Mudder event before. And one is not likely to see it present itself at any other event in the future – except for a future WTM. Successfully completing this obstacle was simple, step off the plank… Yet as you approached, the sound of shotguns popping could be heard which made you think twice about what awaited. However, there were no shotguns, this was the sound of other Mudders landing in the water. Think thrice…Once you stood at the edge and looked over spying only air and the dark water below, your mental grit is all that allowed you to make that step. Mudders explained the drop as lasting long enough to contemplate how long they were falling or question why they hadn’t splashed down yet. This was indeed a long drop. Once you swam across the lake and climbed up the wet cargo net, Mudders found themselves looking back on their jump as they watched others follow their path. Mental grit time…every Mudder would have to complete this obstacle at the end of every single lap – your first lap – your fifth lap – your tenth lap – would all prove to be immensely harder to muster the strength to step off the plank yet again. Simple? In addition to The Cliff was the introduction of another completely new obstacle deemed Swingers. This is an obstacle that Tough Mudder unveiled at its innovation labs event just before WTM, but only a small handful of Mudders were invited. Talking with other Mudders who were in attendance, it was clear that Tough Mutter was taking in all the attendee’s recommendations and working them into the actual obstacles. As one test lab innovator participant indicated, “Tough Mudder was making their improvements to the obstacles as they watched.” And now that WTM was upon them “it was clear as day when they approached the obstacles on the course, that of course the improvements were implemented and TM chose the harder recommendations.” Swingers required you to climb to the top of a 20 foot platform where a handle was hanging 8 feet in front of you and above the water below. Your goal was not just to grab the handle and swing, it was to swing to a bell hanging from the towering structure some distance away from and above you. Once you jump from the 20 foot platform, hopefully successfully grabbing the handle, you would be flung over the water and into the air where with any hope you would spot the bell hanging in the air and be able to strike it with your hand before dropping 25 feet into the water below. If you were successful, you got to move on, if you were not, Tough Mudder had a nice penalty lap waiting for you. This is another area that Tough Mudder definitely stepped up their game from previous WTM’s. Penalties were not simply a small little jog for a tenth of a mile. Penalty laps included longer distances uphill climbs while carrying cinder blocks or crawls under barbed wire for 40 feet uphill. These penalties did not only suck up time, they added distance, a total of over a mile and a half per lap. Of course, distance wasn’t the only issue, fatigue after multiple failures would take their toll. Thinking you were just going to dip into the water and bypass the penalty lap was a poor choice as TM manned each obstacle throughout the night, unlike previous years.

There were other new obstacles such as Grabbin’ Shaft (modified Funkey Monkey), The Gamble (roll of the dice for EST), The Liberator (an A-frame peg board), The Grappler (a rope throw and climb), Weigh Too Tough (bucket carry with a given weight and product), all great new additions to World’s Toughest Mudder. For the obstacles that were the same, many appeared as a hybrid. For example, Hit the Wall was a combination of their 10’ wall, Glory Blades and Balls to the Wall together as one obstacle. And then there were some standards such as Ladder to Hell, Mud Mile, and Everest. In any case, the obstacles were big and worthy of this championship event. But it wasn’t just terrain and obstacles. 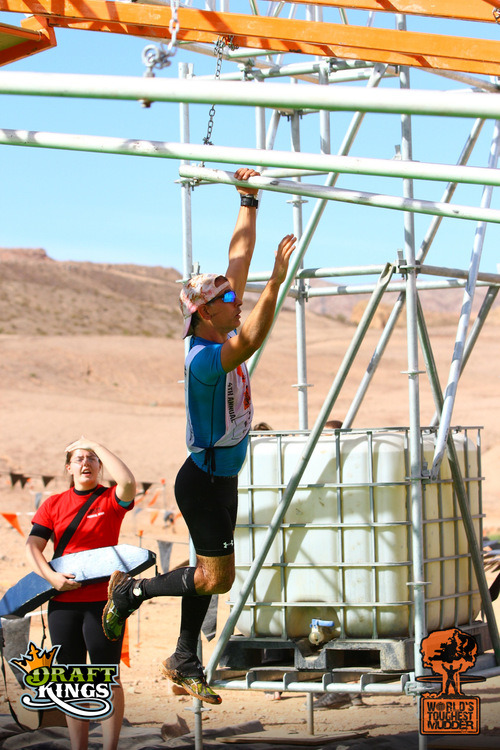 Many criticized Tough Mudder about the warm Las Vegas climate – but after the event the criticism ceased. On Friday, the day of set up temperatures were in the mid-seventies and with the reflection of heat off the ground and the clear open skies, it felt more like 90. Come race day this was going to be a new challenge that participants at World’s Toughest Mudder had not experienced before. Hydration, protection from the Sun, and managing your pace so as not to expire, was all going to be new – that is until the Sun started going down. After only two laps, many were feeling the effects of the heat and improper preparation. This stopped many racers, or worse yet, set them up for failure as the sun went down. It has always been noted that the true race began when the sun went down but this year new meaning was applied. The temperature started to drop sharply as the sun started diving from the sky at 3pm. By dusk the temperature was reaching the low 60s and with everyone’s body regulating the warm temperature, 60 felt more like 40. But there was more to come. A little after 7 o’clock those at camp got the first dose of a small little breeze that blew and played with their hair – stirring up a little dirt. By 8 o’clock these breezes were gusting at over 30 miles an hour. Shortly later and through the night, the winds became gusts up to 50 miles an hour. One pit crew member was quoted as saying of tent city, “plastic bags and cheap tents roll down the empty runway like tumbleweeds. Inside my tent the sound is deafening.” Temperatures plummeted, and a freeze warning was issued by the Weather Service. By nightfall temperatures were in the thirties, heat and hydration was no longer an issue, hypothermia became real as many Mudders we’re unfortunately struck from the course and into local hospitals. With the combination of the rough and rugged terrain and winds making the course feel like the Arab desert, Mudders we’re definitely put to the test to stay on course for the remainder of the night. A slow march was not going to guarantee you a 24 hour finish. 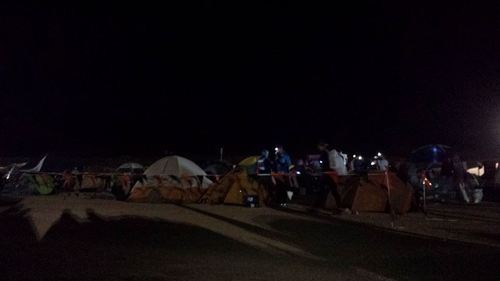 Come morning the field has been cut in half. 600 Mudders remind on the course in various states where 600 other Mudders sought refuge off course – some in the medical tent or hospital. Of the 600, a much smaller handful were still competing for their goal of being the World’s Toughest Mudder. It came down to three: Ryan Atkins took first place for the males, Amelia Boone took first place for the females, and the Wolf Pack Spartan team, a group of Spartan Race sponsored racers, took first place away from the Australian – Under Armour sponsored team in the late hours. But the real winners are those who showed up, those who started the event by crossing the starting line and ran their race, completing their distance and reaching their goals, whatever those might have been. For some 25 miles was something to be proud of and for others the 24 hour headband. It is safe to say that this was the best World’s Toughest Mudder ever put on. The combination of new and unique obstacles coupled with new train and environmental variables that no one could predict, made this an amazing event. It is safe to say Tough Mudder outdid themselves this year and every Mudder on the course was thankful that they did. This was going to be my last World’s Toughest Mudder as I was becoming bored with the events mundane, but this event lit a new fire in me. Although being challenging and a true competitive event, I had fun. Yes I said fun. The terrain and view of Lake Las Vegas made the event feel more like a trail race than a concrete pounding. The change of obstacles at night from those during the day brought new interest and the obstacles themselves were new enough that they did not get boring. The event also catered itself to the pit crew so that spectating and supporting the participants was easy. This made the pit crew a true part of the event, not a group of lost souls standing at their tents waiting for their racer to return. It was fun and it showed on the faces of everyone present. 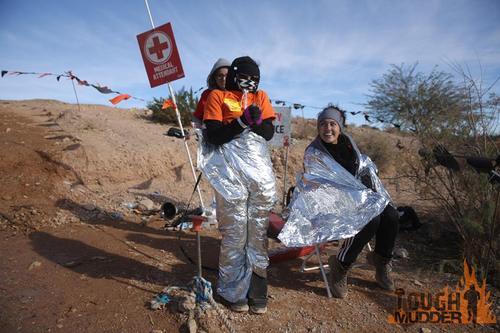 But that’s not all, this success of this event was not solely to do with Tough Mudder or its participants but more to do with its volunteers. These volunteers tirelessly stood by making sure that safety was their first concern followed by fun. They smiled when cold and wet, a challenge to continue on when you looked like you were down. One volunteer give hugs when you were cold and wet at midnight. I did not encounter one volunteer who did not have a positive attitude or was not encouraging to any athlete on the field. And when you count the 20+ obstacles and the 24 hours of course coverage, we’re talking about a lot of volunteers. Thank you volunteers! 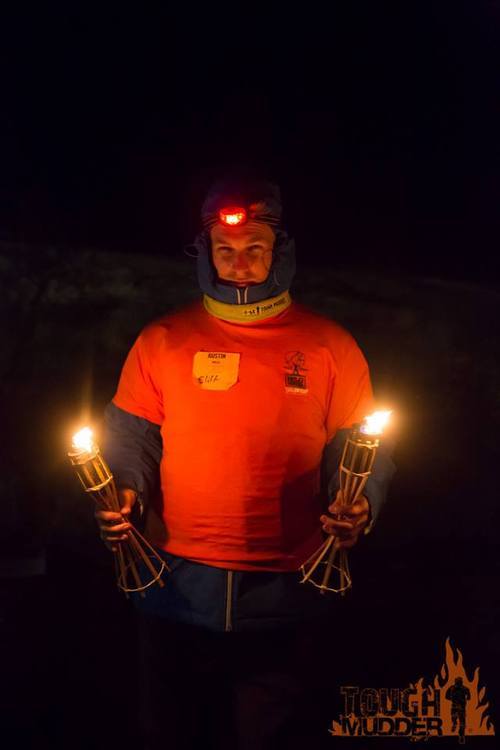 The heart and soul of Mudder Nation is alive and well and expressed itself whole heartedly at World’s Toughest Mudder 2104. 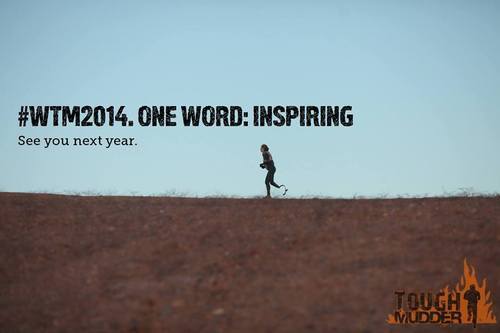 Until next year Tough Mudder. 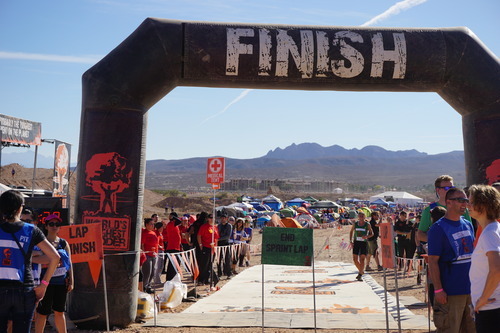